Sa Wanphet sits beside a rice paddy and experiments with surface texture on clay vase Sukhothai, Thailand, 2017. All photographs courtesy of Sa Wanphet.

Of Jungles and Snow

The house was tube-shaped and, from its one rounded wall, windows jutted like thick battlement fortifications. A maid ushered us inside and disappeared in whispers, allowing a silence heavy with the architecture of dark wood and concrete to press in.

Groomed and suited, elderly and frail, the Thai-Chinese gentleman who shuffled across the foyer presented a counterpoint to the robust 1960s brutalism of his manse. We brushed through the pleasantries of greeting, followed him as he unlocked the kind of stout door that needs shouldering to open, and descended stairs plush with deep dark-blue carpet to his private, subterranean museum.

The edges of the vast circular space were dark—the walls and ceiling seemed lost—so that the cubic glass cabinetry was the focus, and their lighted contents the only things one saw or remembered.

Here, a complete dinner set of colorful Benjarong, rimmed in gold and glazed in playful twists of flowers and birds, used more than a hundred years ago to serve a Thai king and his queens. Two rows over, a Chinese blue-and-white ceramic opium pillow. Next to it, the ceramic pipe that unlocked those wild, Coleridgean dreams. And in pride of place at the end of the main aisle, a Ming Dynasty porcelain vase, which the gentlemen released from its protective case into his hands, turning it over and admiring it, then offering it to me and my awe-struck companion. Despite the soft carpet underfoot, we both declined. The gentleman insisted there was something else we must hold; it would surprise us. He led us to cabinets sheltering cruder vessels and jugs, whose colors were the ochers and reds and oranges of clay, their decorations simple. This was Ban Chiang, the three-thousand-year-old Bronze Age pottery from what is now Udon Thani province. From its chunky appearance, I expected to have to heft the wide bowl he handed me, but it was light. It deceived the neural connections between my eyes and hands like a magician.

My companion that day was a well-connected, middle-aged Japanese woman. Grateful for my tutoring her children, whenever possible she ushered me to places in Bangkok and its surrounds that few farang get to see and introduced me to people few get to meet. One excursion might be to a museum beneath a wealthy man’s mansion, another to the clattering wooden silk looms in an unpainted shack, where septuagenarian women sat weaving rough rugs to support their families. 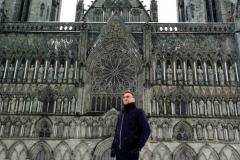 Anthony Richards was born in Australia and has lived a life sometimes a little too interesting in Indonesia, Thailand, India, China, and the United Arab Emirates. He now lives in Norway, enjoying social democracy, clean air and white winters. He'd like to write about those parts of a robustly misspent youth he can recall but is worried nobody would believe any of it.  Contact Richards at antchazrich@gmail.com.

Sa Wanphet is a ceramic artist working in Phitsanulok, Thailand.  She can be reached at thita_wanphet@hotmail.com; follow her on Instagram @pottery_by_sa.