The Joy of Cooking: A Medieval Journey

Harkening to an earlier time

The medieval European archaeological record is my guide as I make pots based on forms historically situated between the fall of the Roman Empire, 600 CE, and the end of Elizabeth I's reign, approximately 1600 CE. To be even more specific, much of my attention is the re-creation of pots that were actively used in cooking in fires. I intend for my wares to be used in the same fashion and to educate my customers on medieval cooking processes and recipes. To remain historically accurate, I use clay that is similar to the clay used by our predecessors, rather than the modern fireclays used by makers of contemporary flameware.

Over the years, I have surrounded myself with people interested in diverse medieval arts. I spend time with the people who took their recreation seriously. So, when I was asked by cooks to create clay cooking pots, I jumped at the task.

The pre-history of my journey

In 1995, I moved into my condo on Franklin Avenue in Minneapolis. In 1997, Northern Clay Center (NCC) moved into their current location across the street from me. In 2010, I finally made it across the street. Yes, my front window overlooked NCC for thirteen years before I took my first class. Now, I have cooking pots in all of North America except Hawaii, Nunavut, The Yukon, and Prince Edward Island. How did a technology guy end up a potter? You know, I am not sure, but the journey continues to be amazing!

New beginnings
In 2010, my life was changing. I had no idea how much was going to change. I was recovering from a traumatic brain injury (TBI), my spouse had left, I was working on my masters in management information systems, and decided to start making pottery.

My masters program required one hundred pages of reading a day. I have never been a strong reader and recovering from a TBI made studying a challenge. My brain needed an activity different from reading. I had a number of incredible artist friends, such as LARRY BROW in Lawrence, Kansas, and STEPHANIE COHEN in St. Louis, Missouri, who were professional potters. So, not being the brightest bulb in the marquee, I assumed if they could do it, well – so could I. How hard could this pottery thing really be? 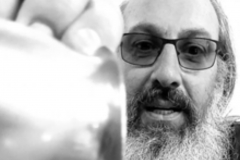 Always a student of history, in 1997 Doug Van Beek wrote the article, "Preliminary Analysis of the Qollqa Valley Collection," a study of terrace irrigation in Peru, published by the Museums of Beloit College in Wisconsin.

He is a potter, historian, and archaeologist. His studio work sits at the intersection of material culture, cooking, and fire. His pots are used in the cross-cultural exploration of cooking and one may find his pots in use in Australia, North America, and Europe. His ceramic education began at the Northern Clay Center in Minneapolis and his current studio is at Caufield Clayworks in St. Paul, Minnesota. As a member of the Society for Creative Anachronism, Van Beek was awarded a Laurel, signifying mastery in pottery and research. At the 2019 National Council on Education for the Ceramic Arts conference in Minneapolis, Van Beek led a discussion on the history of medieval pottery and cooking.