I’m no expert on ceramics.

Given my lack of knowledge, I was somewhat apprehensive when I was asked to research articles on the relationship between architecture, ceramics, and function. Still, learning new things almost daily about the world of ceramics in more depth is one of my favorite parts of interning at Studio Potter, so I started researching. This report follows my research journey into the unknown world of architectural ceramics.

I decided that first I needed to get a sense of the historical presence of ceramics in architecture. Being a college student gives me access to extensive library databases. In her paper published by The Annual of the British School of Athens, Anastasia Gadolou catalogs and examines the terra-cotta model fragments of a Late Geometric apsidal temple in western Greece, describes the archaeological discovery of the model, and explains how its technical features are consistent with ancient Achaean ceramic practice. As a beginner I found it interesting that ceramics were being widely used in a directly architectural capacity as far back in history as the eighth century B.C.E.

Continuing my research, I moved on to a setting that I am familiar with through my studies of artists such as Thomas More and rulers such as Henry VIII. I love some of the literature and history of sixteenth-century England, but I didn’t know anything about the ceramics of that era until  I read an article in Post-Medieval Archaeology about terra-cotta in early sixteenth-century English architecture. In it, authors Terence Paul Smith and Bruce Watson describe English terra-cotta usage and production methods. Although terra-cotta’s use proved to be a short-lived fashion, I was excited to learn something new about one of my favorite historical periods.

Now I moved deeper into the ongoing historical bond between ceramics and architecture. In a paper published by Procedia - Social and Behavioral Sciences, Olgu Sümengen Berker discusses that connection by bringing in examples of ceramics present in architectural spaces, specifically, mosaics, prompting me to think about what function mosaics might serve. Are they simply decorative and expressive, or can they play a larger role in the structures of our world? 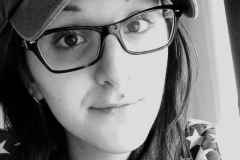 Monique is a student at Westfield State University, Westfield, Massachusetts, working towards a bachelor's degree in English with writing concentration. She's a former editorial assistant and spring 2016 intern for Studio Potter. She has also served the Westfield Voice student newspaper as head copy editor and pioneered the student-run magazine Portfolio's creative non-fiction section. She will graduate in 2017, and aspires to a carrer in writing and publishing.