Gender is defined by the Oxford English Dictionary as "the state of being male or female (typically used concerning social and cultural differences rather than biological ones.)" Sex does not equal gender. While Facebook now has over sixty descriptions of gender variance, there are still only two options on most job applications and legal documents. Gender roles have changed, but there is still an underlying current that exists from which many of us suffer.

The belief surrounding the notion of real "women" and real "men" reduces us to mere stereotypes. Advertisements, social media, and religious doctrines define a narrow vision of gender norms to this day. Transgender-activist Leslie Feinberg said, "That pink-blue dogma assumes that biology steers our social destiny. We have been taught that being born female or male will determine how we dress and walk, whether we will prefer our hair shortly cropped or long and flowing, whether we will be emotionally nurturing or repressed. According to this way of thinking, masculine females are trying to look 'like men' and feminine males are trying to act 'like women.' Those of us who transgress those gender assumptions also shatter their inflexibility." Gender violations are the crux of the many who refuse to acknowledge the colorful presentations and dualities that enrich who we are today.

I came out in 2008 after many years of alcohol and drug addiction. According to the HUMAN RIGHTS CAMPAIGN, 41 percent of transgender individuals attempt suicide. Unfortunately, I am in that percentage. ("Trans" is an abbreviation of "transgender" and is often used when referring to someone who identifies as transgender.) While being trans is not a choice, being visible and therefore vulnerable is. I didn't know I was transgender when I was young. There was no word for it. There were words like transsexual and cross-dresser. There were drag performances. None of those seemed to categorize my existence. Transsexuals are people who transition from one sex to another. Transgender is a term for people whose gender identity, expression, or behavior does not align with or conform to their assigned gender at birth.

Trans-ness comes in all sorts of varieties. Some gender identities make it easier to exist in our society. Being a gender-nonconforming person can be exhausting. Contrary to popular belief, thick skin and being tough do not make it easier to be constantly asked "what" you are. Are you a boy or a girl? 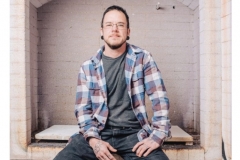 Mac McCusker received their BA from Armstrong State University and an MFA from Georgia State University. They have been a resident artist at Odyssey Clayworks and Penland and was an emerging artist in Ceramics Monthly, 2018. They have been a consistent lecturer and presenter at the National Council on Education for the Ceramic Arts. McCusker has taught college in Savannah and Atlanta, Georgia, and teaches workshops around the United States. Their work is exhibited nationally. McCusker currently resides in Durham, North Carolina, and is the studio manager at Claymakers.