I started making cups after serving for five-plus years in the Marine Corps. I took advantage of the GI Bill and found Art at a community college. I did not make cups when I joined the Marines.

With the 1st Marine Division I traveled to Kuwait and Saudi Arabia (to take part in the ’91 Gulf War), and as an Embassy Guard, I spent fifteen months in Rome and fifteen months in Paris. In the time since I was discharged from the Marines, my cups have taken me across the United States and to China, Vietnam (near where my father fought), France (Vent des Forêts), and Germany. I work on the UC Berkeley campus, where I am exposed to people, art, music, and ideas from around the world. As I and the cups travel, the world seems smaller, and no place is unaffected by war.

The times I have witnessed the cups being something more than just a cup are the times when someone shared a story about the images on the cup. Someone who had firsthand experience with that insignia or image and shared a story with someone they love. The power of the cups comes from the people they resonate with.

Someone once said something like, “Art is the possibility of love between strangers.” I like the idea of being able to share a beverage and a story. Working in ceramics, I have the possibility of sharing a beverage and a story with someone 500,000 to 1,000,000 years from now. From my hand to your hand to some point thousands of years in the future. 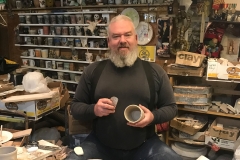 Ehren Tool is an artist whose work is heavily influenced by his service in the Marine Corps and his subsequent return to the civilian world. Tool has made and given away over 20,000 cups since 2001. He received his MFA in 2005 from the University of California Berkeley. Tool just makes cups, and believes peace is the only adequate war memorial. Tool can be reached at ehrentool@gmail.com.