A few years back I found myself eyeing mass produced ceramic dishes and thinking that the designs weren’t half bad. Something had changed when I wasn’t looking. The massive chasm that used to exist between the mass-produced and handmade had perceptibly narrowed. I thought of mass produced pottery as a qualitatively different than what I made. I thought of my work as the antithesis of mass-produced. Each piece deeply personal. Each piece completely unique. I didn’t worry about competing because I wasn’t playing the same game. But here were these dishes and the designs weren’t half-bad, and somehow they were encroaching. It was hard not to think of them as the enemy. An enemy who had made a surprising advance.

If mass production is the enemy, then the enemy is mighty and not far from the door. If this was a war, was there any way my pots could win? I imagined a victory in some kind of cultural upheaval where humanity suddenly rejected the easy, unobtrusive relationship it has with commercially made objects and learned to savor the handmade. I imagined each one of my pots as a small envoy advancing this vision in the world. I still hold out hope for this vision, but it is hard not to feel like it is an uphill battle at best.

If my pots are small soldiers in some sort of broad cultural war, then the one thing I can arm them with is my human-ness. While the lackluster sameness of mass-produced pottery has improved (it has a bit more character), it still demands certain qualities: The wares have to look nearly identical, and they have to be efficient and inexpensive to make. Industry has gotten better at mimicking handmade pottery, but remnants of its production still linger. Flawless pots that are exact replicas of each other still don’t feel quite human. My kind of pottery is slow and very, very human.

So how does one go about highlighting human-ness? How do I draw attention to the fact that the pots I create are made with my hands? To find out, I decided I would do the things machines couldn’t do well. I started with form. I altered my thrown pots through faceting. I delighted in cutting into a perfectly round pot – each cut a bit closer to human. I began adding oddities like protrusions for the fingers to rest upon, little bobbles or dangles meant for its user to play with. 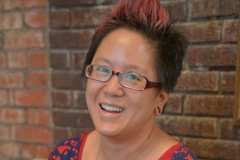 Grace Sheese teaches ceramics at Illinois Wesleyan University in Bloomington, IL, where she lives with her husband and son.  Using ordinary animals and objects, Grace and her pots tell small, everyday stories about her life, her friends' lives, observations she makes and whatever else may pop into her head.