I joined Instagram in 2012, and I was immediately excited (as all makers were at that early stage) by the speed with which communities formed. Like iron filings to a magnet, “like” minds were being drawn together across all disciplines, resulting in honest friendships. Worldwide, people were organising virtual meet-ups with their new contacts and groups. Complete strangers were quickly becoming friends and sharing their commonalities. Suddenly, making contact with international peers in a very informal and direct setting was easy. This aligned perfectly with my instinct to bring people together, and thus, the idea of The Cup Collaboration was born.

The overall concept developed quite organically. As someone who teaches ceramics in a community arts setting and produces functional work for exhibition, retail and wholesale, I feel somewhat self-indulgent taking time out of my practice to develop new ideas. The action of play, like that carried out by children, is when reality is left behind and imaginings and stories are created purely by instinct and without constraint. I wanted to encourage a similar spirit of play for artists, as a way to indulge in new ideas. I invited artists to participate in the project, which resulted in two shows, the first in 2015 with thirty-two participants and the second in 2016, with sixty-two, almost double the number.

My choice of participants was based on three things: skill in practice, social media presence (an Instagram account was required), and my admiration of their work. I paired up makers and asked them to collaborate to produce two cups and to contribute one cup each in their individual style; four cups resulted from each pairing. I intended some pairings to facilitate a mentor-mentee relationship, others to develop international friendships, and many to cement existing friendships. Like a giant game of Go Fish, I wrote participants’ names on cards and spread them across a table, where I sifted and paired them together. Some pairings I had already formed in my mind before the process began, and the remainder gracefully came together like the partners of a formal dance coming onto the floor. 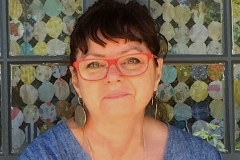 Adriana Christianson is a studio potter, curator and educator based in Croydon, near Mt. Dandenong in Melbourne, Australia. Her highly detailed, functional pieces are inspired by the flora and fauna of Australia. Her tiny studio sits next to her 1920s farmhouse and is surrounded by a rambling garden. Contact her at mail@adrianachristianson.com.au.