Tuile-Fionnuala, (Taloola-Fionnuala) or Tuile (Toolee) for short, is a young artist that spends her days drawing, painting, making pots and playing with her sister Aoife and her friend Veela. She loves animals, is a vegetarian, and. as a student of life, she thinks a lot about important global and social issues, and animal rights. She also participated in her first art exhibition in May of 2019. A year later her ceramic cups were part of the Clay Akar Yunomi Invitational and, she is currently collaborating with Roberto Lugo, Ryan Reich, Chanakarn Semachai, and Ryan Hurst.

To understand how a ten-year-old girl has the confidence, creative abilities, support network, and facilities to successfully pursue a ceramics career, it might be helpful to understand her support system.

In the eighties, a homeless teenager in a notorious neighbourhood with only two years of high school, I was raising myself and my son.

Upon convincing the administration at St. Lawrence College in Kingston, Ontario, to accept me as a mature student, I began  studying fine arts and fashion design. Eight years later, I graduated both programs with honours. In 1993 juror Pierre Cardin awarded my work with the prestigious Young Designers Award in an annual competition sponsored by AirFrance. The exhibition was held at the Louvre in Paris and led to a work placement in London at Bella Freud‘s design house. The highlight of the experience was definitely getting to chat with her father, renowned painter Lucian Freud, when he would come in to organize lunch dates with Bella.

Returning to Canada, I took a small business course and received a $48,000 start up grant from the government to purchase fashion design equipment from St. Lawrence College. With the equipment I started the Canadian Deesigner's Co-op (CDC), a fashion-design co-op that acted as an incubator for young design businesses. At the same time, I began the Young Artists Of Kingston (Y.A.K.), a seasonal youth arts program that initially acted as a fundraiser for the CDC. 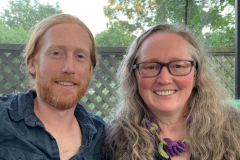 Carrie Whalen is an entrepreneur, artist, designer, parent, and has been running children’s arts programs for twenty-eight years. Carrie has studied fine arts and fashion design and is passionate about exploring and creating opportunities for alternative forms of education. In recent years she has turned most of her creative energy towards ceramic arts.

Jonathan Morin is an entrepreneur who has worked in many different fields, including children's arts programming, children's arts development, woodworking, ergonomics, and online programming. In his recreation time, Jonathan pursues his love of eighteenth- and nineteenth-century Scottish broadswordsmanship, playing board games with his three children, and painting.