A Gate and its Keepers

Editor's Note: Every year at the National Council on Education in the Ceramic Arts conference Studio Potter acknowledges exceptional student artwork shown at the National Juried Student Exhibition (NJSE) with a merit award. Recipients receive a one-year membership and the opportunity to publish an essay in the journal. This is a unique opportunity to hear what the new generation is ideating and enacting.

Failure impacts many ceramic artists. In 2011, Studio Potter dedicated an entire issue to failure, featuring articles that worked to define failure by a chorus of ceramic artists whose voices echo normative paradigms of the field at large in the contemporary United States. I draw attention to this echo that continues in time, saturating the field of ceramics by re-presenting these perspectives of failure and, in turn, success. I then resist these confines that work against inclusivity efforts to reorient the ceramics field towards the liberatory potential of clay.[i]

Failure is normative as it is framed as normal or natural,[ii] a direct route to freedom,[iii] a catalyst for growth [in pursuit of success],[iv] a necessary indication that success is nearby,[v] and a resource if one has courage enough to be in dialogue with it.[vi]

Defining failure is an ambiguous paradox bolstered by its relationship to success. The two – failure and success – oscillate in a dichotomy without room for an alternative. They permeate normative ceramics through studios and art institutions as gatekeepers to creating in clay. Normative ceramics works to silence clay as a material with the liberatory potential to decommodify the art world and build affective communities of makers and lovers that value multiplicity and focus on the holistic support of its members. Rejecting the confines of failure and success, going beyond their binary, reconnects us to clay. It empowers ceramic artists to explore clay by and for themselves and their communities. It allows ceramic artists to reclaim a relationship with clay by shifting assumptions and frameworks of normative ceramics. 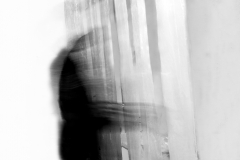 eM asks ceramic questions, observing their body in relation to the world in which it can touch through performative material explorations. They received a MFA in ceramics from the University of Colorado, Boulder, in 2021 and are currently a PhD student in performance studies at the University of California, Davis, where they write on the liberatory power of clay through politics of representation, decolonial and anti-racist praxis and practice, and queer and feminist methods. eM teaches in the women and gender studies department at the University of Colorado, Boulder, and in the foundations area at Rocky Mountain College of Art and Design.