I was on my way to a graduate school life-drawing class when, on a giant tv in the student union, I saw a plane fly into the World Trade Center. Three semesters later I was in Iraq, deployed as a medic with the Iowa National Guard.

They didn’t issue me my aid bag. They also forgot to give me the ceramic plates (SAPI, or Small Arms Protective Insert) for body armor that would stop bullets, until just before I came home.

My squad ran daily security missions outside the wire in and around Mosul, Iraq, in addition to taking care of our medic duties. We supported a children’s hospital in western Mosul. On one mission, as I sat holding a light machine gun in the back of our Mad Max gun truck, I had the craziest realization: I was seeing the ruins of Nineveh, the crowning jewel of the Assyrian Empire. (Don’t sleep through Art History.)

I make my work like the Iraq war—poorly crafted and executed.

Through my work in ceramics, I hope to show people the emotional aesthetic of war imprinted on me. Maybe it will provide a tiny glimpse behind the curtain, myth, and rhetoric that are sold and packaged as war. I make artwork about war not because I enjoy it or want to, but because I have to. It is important to me that people feel what war does to those who serve. It’s something that isn’t really talked about, because it is ugly and disturbing, and a conversation about it leaves everyone feeling worse about themselves, usually destroying the evening. Really talking about war challenges our national narrative and all it veils. 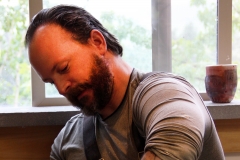 Jesse Albrecht is a Montana-based artist and facilitator with the non-profit foundation, The Station, working with active duty military, their families, and Gold Star children. Deployed to Iraq whilst completing his MFA in ceramics (University of Iowa), Albrecht explores “the collision of war myth and reality through the physical and emotional aesthetics of combat.” His work is in the permanent collections of The Smithsonian, the National Archives, and the Library of Congress. Albrecht can be reached at jesse.albrecht@gmail.com, and followed on Instagram @albrechtartco.