On Father’s Day of this year, I awoke to a bear hug from my four-year-old, Theodore, and drool from my nine-month-old, Otto. My wife, Ashley, had gathered the boys early enough to surprise me with breakfast and a gift—some new Air Jordans. Groggy and barely awake, I thought to myself, “What is this for? Why am I being celebrated?” It didn’t make sense and still doesn’t make sense now.

Ashley and I found out we were going to have a child when I was in graduate school at Penn State, and although we were not financially prepared (who is?), we were beyond thrilled by the news. I committed myself to supporting Ashley through her pregnancy, and worried about how I would provide food, clothing, and a place to live and generally support a brand-new human. My innermost struggle became thinking about what kind of father I would be. My thesis work focused on the school-to-prison pipeline of men of color, but it became more complicated as I feared my child becoming part of this system. I found it difficult to see the subject of my thesis objectively.

The moment we found out we were going to have a boy, I began to think of the men in my family. Historically, they had graduated only from middle school and were encouraged to find full-time work as soon as they were able. For example, I worked part-time at a Christmas wreath factory from the age of thirteen, and my choices were to attend high school or start working full-time. I chose school and made a promise to myself to ensure the financial circumstances that would allow my children to have an education, too. 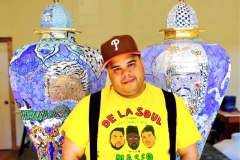 The son of hard-working Puerto Rican immigrants, Roberto was raised in the Kensington neighborhood of Philadelphia. He overcame the social and economic challenges of his childhood due, in part, to his interest in ceramics. Roberto holds a Masters of Fine Arts from Pennsylvania State University, University Park, Pennsylvania, and exhibits his work internationally. He currently teaches at Tyler School of Art in Philadelphia, where he lives with his wife and two young sons. Roberto Lugo is represented by Wexler Gallery.