My interest in surface began very early. As soon as I could crawl, I successfully horrified my mother one afternoon as she sat getting her hair styled by my sister. As the story goes, I crawled into the room where my finely coiffed mother was and dramatically dropped my jaw to enunciate my first word, “hhhhhot.” Glittery glass shards were shimmering on my tongue. I had stolen an ornament off the Christmas tree and taken a hearty bite from it. Surely I was drawn to the intricate reflective beauty of the ornament’s embellished surface. The reactions of my captive audience were that of momentary wonder due to the mercurial sight, followed by the echoing screams of my startled mother as she realized what I’d done.

As I became more mobile, I fixated on my mother’s stash of rhinestone jewelry. A World War II bride, she had a breathtaking array, which was typical of the women of that era. Within their compositions and glittery surfaces time seemed suspended, and they transported me to another world. I imagined an alternate universe resided in those fiery stones just beneath the surface – a limitless atmosphere of luminous color.

My introduction to ceramic surfaces came from a grotto across from my mother’s childhood home in a small Wisconsin town. It was a focal point that attracted thousands of visitors to the region in the early twentieth century. A number of structures covered a few acres, shrines made from repurposed bits of glass, broken ceramic dishes, semiprecious stones, and shells. I remember being at eye level with the most intricately detailed assemblage of color and texture, composed of geodes and broken hand-painted European china. The structures were encrusted with this candylike surface. My parents told me stories of where each bit came from. Some of the repurposed objects had belonged to the people in the town; my grandmother’s broken marriage china was included in the narrative. 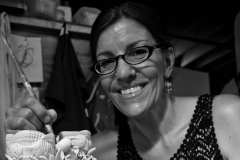 Kate Maury received a Bachelor’s of Fine Art from Kansas City Art Institute and a Master’s of Fine Art from the New York State College of Ceramics at Alfred University. Currently she lives in St. Paul, Minnesota, where she is a studio resident at the Northern Clay Center and teaches full-time as a professor in the School of Art and Design at the University of Wisconsin-Stout. Her work is featured in both juried and invitational shows at regional, national, and international venues.