In an exhibition and panel discussion scheduled for NCECA 2020, entitled Disruption and Disrupting the Canon respectively, Natalia Arbelaez, Magdolene Dykstra, Habiba El-Sayed, and Heidi McKenzie draw attention to the art world’s ongoing tendency to marginalize artists who do not fit a Eurocentric, male, heteronormative worldview. Unfortunately, the relevance of this exhibition and panel discussion was made clear in a recent article by Garth Clark, an internationally renowned ceramic art critic, historian, and curator. On January 15, 2020, Clark published “CFile’s Top 15 Male Artists: Ceramics in Fine Art” in his online journal (notably, two weeks later, it was removed). The article began with several caveats which were meant to explain the reasoning for following in a long tradition of separating out the top men in the field.

“We have two lists, one for men and another for women. This will cause a lot criticism. But, without this separation, only a few women would make the Top 15––not because they are lesser than the men as artists, but the market still discriminates; holding them back. Our top women artists in ceramics list is coming soon.”1

In attempting to answer the question of why women would need their own list, Clark identifies a well-known problem: the market still discriminates. The question is: why rely on the market to determine the “top” artists? If we can agree that this metric is flawed, why continue to rely on it as the rubric for notable art? Instead, why not use Clark’s influence to amplify the voices of those who are continually undervalued by the system?

Another question that emerges from the disclaimer is why the list of women artists is “coming soon”. Instead of publishing both lists simultaneously, the list of male artists got priority attention, continuing to classify women artists as secondary.

Another question in response to this article is where artists who do not subscribe to the out-dated gender binary fit? This is not just an oversight. This omits a wide range of contributors to our field. As Audre Lorde wrote, “It is to make a point by choice.”2 The decision to list top male and female artists necessarily excludes those artists who identify as non-binary. 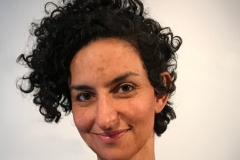 Magdolene Dykstra is an Egyptian-Canadian artist based in St. Catharines, Ontario. She uses raw clay sculptures and installations to meditate on the multiplicity of the human race. Her research includes sublime philosophy, Abstract Expressionism, environmental concerns, and an interest in secular Buddhism. Magdolene received her MFA from Virginia Commonwealth University.

Heidi McKenzie is a Toronto-based ceramic sculptor and potter, arts journalist and curator who is dedicated to the craft of re-invigorating modernism in our times. Inspired by her mixed Indo-Trinidadian and Irish-American ethnicity, her work addresses issues of race, identity and belonging. The work seeks to transcend Eurocentrism through abstraction.

Habiba El-Sayed uses performance and temporal techniques to explore her identity as a Muslim woman. Habiba holds an Advanced Diploma from Sheridan College in Ceramics and a BFA from the Nova Scotia College of Art and Design. She’s currently a resident artist at Harbourfront Center in Toronto.

Natalia Arbelaez is a Colombian-American artist, born and raised in Miami, Florida to immigrant parents. She received her BFA from Florida International University and her MFA from the Ohio State University, where she received an Enrichment Fellowship. She is currently an Artist-In-Residence at the Museum of Art and Design in NYC.