Cultural Continuity: Experimental Anthropology in Colombia and Beyond

“These practices are not primitive, they’re ancestral. Some nations construct their identities with ancestral objects.” –Santiago Isaza

On a January, 2019, research trip to Medellín, Colombia, with professors and colleagues from Alfred University, I met a man who enlightened me to the role of indigenous ceramics in contemporary culture. Santiago Isaza is a thirty-five-year-old anthropologist and ceramist living in Santa Elena, a small town on a peak above the valley of Medellín. Our group visited Isaza’s home and studio to learn about the pre-Columbian ceramics of the area. The visit began as a fairly casual conversation, which lead to a studio visit, a trek to a nearby archaeology dig site, and the examining of some fascinating artifacts. Later that week, I returned to Isaza’s home with my colleague Amara Abdal Figueroa, who, through his Puerto Rican heritage, was able help interpret and unpack the Latin cultural references I didn’t understand. I interviewed Isaza about his work, and have included some of our conversation (edited for clarity), after a brief description of Isaza’s background.

Isaza’s path to ceramics began with his studies at the University of Antioquia in Medellín. The Colombian intelligentsia have historically considered ceramics to be an archaeological discipline rather than an artistic one: Colombians who study ceramics do so to understand the manufacturing processes and materials used by ancient cultures. Isaza tells me that his teacher Jorge Prieto’s approach to ceramics, called “experimental anthropology,” is informed by anthropological training and is based on his view that studying and re-creating objects is essential for the preservation of ancestral culture.

Having trained (informally) in ceramics with indigenous peoples throughout Colombia, Prieto is a relatively unknown figure in contemporary Colombian ceramics. He taught for a brief time alongside anthropology professors at the University of Antioquia and at the university’s museum. At the university, Isaza first worked with clay. 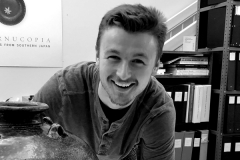 Gregory holds a Bachelor of Science degree in East Asian Art History and a Bachelor of Fine Arts degree focused in the disciplines of ceramics and glass; both degrees granted by the New York State College of Ceramics at Alfred University, Alfred, New York. Gregory now lives and works in Brooklyn, New York.