Connecting to the Earth through Art

Growing up in a rural setting, I learned from an early age to respect the natural world through gardening, food preservation, livestock care, and repurposing. As an adult, reflecting on these experiences that influenced my values with heightened sensitivity to local and global ecologies, I realize that not everyone has had such profound connections to the natural world. As an artist, I feel a responsibility to use my artwork and research to inspire others to "join the good fight," where we can collectively nurture the natural world, which can then support us in return.

We are in an age where it is difficult to think about the future and how what we leave behind directly affects future generations. Daily living is challenging enough with the rising cost of living, unlivable wages, the housing crisis, and unjust socio-economics, to list a few contending factors. Be that as it may, it is imperative for us as a collective to be aware of our daily habits in order to preserve our natural resources. Yes, the corporate world, with its mass production, wasteful manners, and toxicity, is responsible for much of our environmental devastation. Still, as consumers and makers, we have the power to have our voices heard. Small positive actions make a significant change.

As a maker, I look to multiple sources for positive environmental inspiration. This provides me with a foundation that guides my decisions on: materials (clay, upcycled plastic, upcycled clothing, etc.), installation placement, sculptural forms, and artistic processes (coil building, crocheting, paper making, etc.). I unite these conscious choices into cohesive multi-media sculptures and installations that speak to my environmental concern. My moral compass is guided by past experiences, art movements, eco-travesties, and artists who make environmentally impactful work.

The arte povera movement, also referred to as "poor art," relied on both affordable and upcycled cast-off materials to produce artwork. Germano Celant was the theorist who led this movement, and in 1967 he published the Manifesto dell'Arte Povera. In his manifesto, he called for a new attitude "directed at locating the real meaning of the emergent human sense of living...[A]n identification of human nature, which no longer has the theological, medieval sense of narrator – narratum, but a pragmatic intent of liberation, of non-addition of objects to our ideas of the world, as we see it today."[1] This particular art movement was sparked by a rejection of the time period's economic boom. Key phrases associated with this art movement include "less is more," "slow down," and "proceed towards the origins."[2] While arte povera was emerging in Europe, minimalism, pop art, and land art became prevalent in the United States. It is no wonder that these art movements have so much overlap. 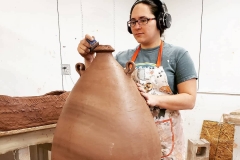 Danielle O'Malley is a ceramist from Helena, Montana, who earned their MFA from UMass Dartmouth. They are the Art Mobile of Montana executive director, the Montana Clay director, and an NCECA Green Task Force member. Their work is in the Northwest Art Gallery, the Taoxichuan Art Center, and numerous private collections.