Part I, introducing the analyzer as a tool appeared in Studio Potter, Vol. 5, No. 2. The material in this present article was developed under a grant from the NEA and presented at Marlboro College in a workshop organized by Malcom Wright and Studio Potter in the Fall of 1978.

The main purpose of this research was to develop a chart which would enable pot­ters firing reduction to accomplish three ends:

1.         To reproduce desired results from one firing to another.

2.         To convert from one fuel to another, in the event of fuel shortages, and still achieve the same firing results.

3.         To conserve fuel by firing efficiently, without adversely affecting the end result.

To accomplish these ends, a device called a CO2 gas analyzer was to be used to sample the CO2 in the kiln's atmosphere.

The gas analyzer enables the potter to monitor what is happening inside the kiln during a firing. It does not control anything. It is a tool used to measure the atmosphere the way a pyrometer measures atmosphere and temperature; the two most important factors in firing. The gas analyzer, however, does not explain many of the other vari­ables which affect the final results of tiring.

To validate the gas analyzer readings against a specific end result, a clay body matrix was developed, which, when fired in different kilns with different fuels and vary­ing amounts of reduction, would change color accordingly. An indicator glaze, an iron glaze which ranged from yellow in oxidation to deep brown in heavy reduction, was applied to half of each of the clay sam­ple pieces. These half-glazed clay samples were used to collect visual information on the effects of reduction during heating, as well as the effects of re-oxidation during cooling, on both the clay body and the glaze.

The one difference between the theoretical and the experimental data concerning reduction was in regard to the natural gas, which reduced the clay-glaze samples more heavily than would have been pre­dicted from the analyzer measurements of CO2. For some reason (perhaps the higher hydrogen content of natural gas), in reduction, it is necessary to add approximately 0.5% to the theoretical numbers in the North American Combustion Handbook (thereby decreasing the amount of reduction slightly). All numbers in Figure 1. (the graph) and Figures 2. and 3. should be accurate within half a percentage point, provided that kiln size, firing profiles, and other variables remain constant. These are the numbers potters should use to deter­mine consistency, efficiency, and conver­sion of fuels.

Use of the CO2 Charts for Fuel Efficiency and Conversion 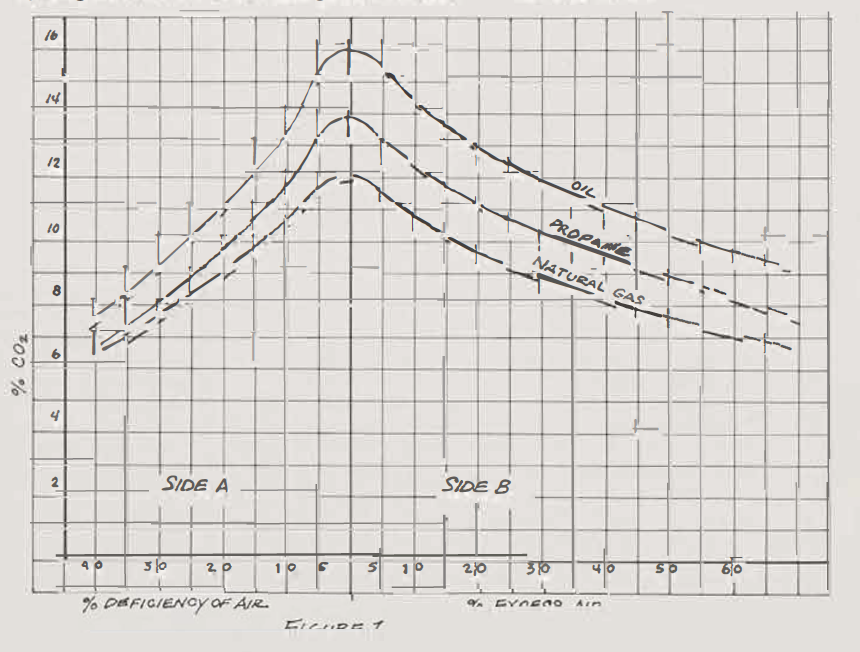 The peak number (neutral) may vary slightly with the type of burner or location of the gas source, natural gas being vari­able from region to region, ranging from 11.8% to 12.3% CO2. The closer the kiln's atmosphere measures to the peak number, in either oxidation or reduction, the more efficiently the kiln is firing. The rounded peaks in the graph (see Figure 1.) show the results of a poor mixing of fuels.

The goal is to get CO2 readings in both oxidation and reduction that are as close to neutral as possible and still achieve the desired clay-glaze effects from the firing. Put another way, a potter's goal is to use as little excess air or excess gas as necessary for the desired end results. Taking CO2 read­ings by sampling the kiln's atmosphere dur­ing a firing enables the potter to accomplish this end.

Refer now to Figure 3. If a potter fires with natural gas, for example, he should locate his present CO2 readings (obtained with the gas analyzer) across from the heading for natural gas. Let's assume that he has been getting a CO2 reading of about 10.4% during reduction. He will find this under the column headed "10% Air Deficiency," which also tells him that he is reducing fairly lightly. To get the same amount of reduc­tion and equivalent firing results for propane, should he wish to switch the fuels, he will need to get an analyzer reading of 11.6% (Listed in the same column under 10% Air Deficiency). And if at a later date he were to switch to oil, a reading of 13.2% (reading down the same column) would give him approximately the same results.

In the changing of fuels especially, visual sampling - the method presently used by most potters to determine the amount of oxidation and reduction - is usually not accurate enough. The hazy look of natural gas, for example, would over-reduced a propane-burning kiln. Oil can almost never be cleaned up enough to look as clear as propane. Use of these charts and a gas analyzer should produce significantly more accurate results than the eyeball method.

Use of CO2 Charts and Graphs for Oxidation Firing 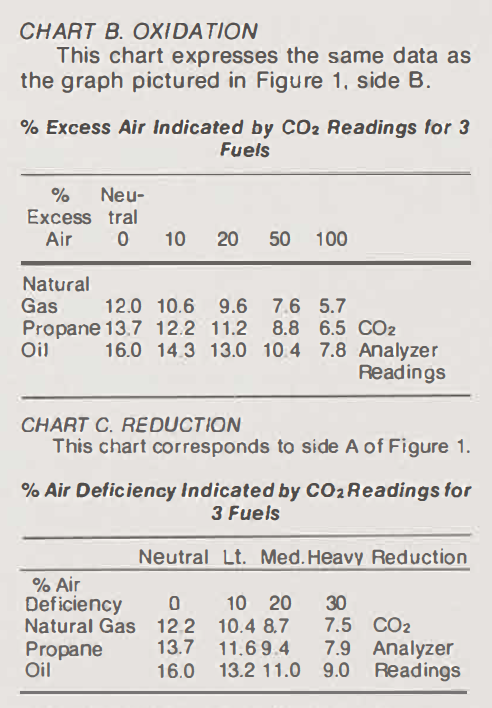 This section refers to side B of the graph in Figure 1 or to Chart B; both give the same information. Measuring CO2 during oxidation is useful for biscuit firing efficiently and for the first half of glaze firing.

In oxidation, the CO2 reading indicates the amount of excess air present and, therefore, the degree of firing inefficiency. Since the amount of excess air present in the kilns atmosphere cannot be determined visually, most potters fire with much more air than is necessary, and thereby considerably more fuel than necessary is used to heat the additional air. The graph and chart show the fuel savings possible by using minimal amounts of excess air. Small savings are accomplished at low temperatures, but much greater savings occur at high temperatures. The excess air is necessary at low temperatures, both to remove water from the clay and to accomplish heat transfer by convection; but it need not be present in as great quantities at higher temperatures.

Surely the air we take so much for granted should be watched even more carefully than the fuel itself, and how many of us do?

Variables Other Than CO2 Which Affect Color Development

The rate of heating and, especially, of cooling is very important to color forma­tion. An interesting experiment withdrawal trial bears this out. Two different kilns were fired to temperature with identical profiles. Draw trials taken at the top tem­perature in each kiln were identical, but the test pieces left to cool in these kilns had final glaze colors that differed from each other, as well as the expected difference from the pair removed before the cooling took place. Kilns of different sizes or kilns constructed with different materials have different cooling rates, which may explain why the CO2 readings can be identical dur­ing the firing, yet the final color results dif­fer somewhat.

Variables Other Than CO2 Which Affect Fuel Efficiency

The type of burner, type of insulation size of kiln, rate of firing, and final tempera­ture all affect fuel efficiency. It is obvious that the greatest fuel savings can be realized by lowering the firing temperature. At a given temperature, however, shorten­ing the firing can also produce marked fuel savings.

Developing a Fast-Firing Profile During Oxidation 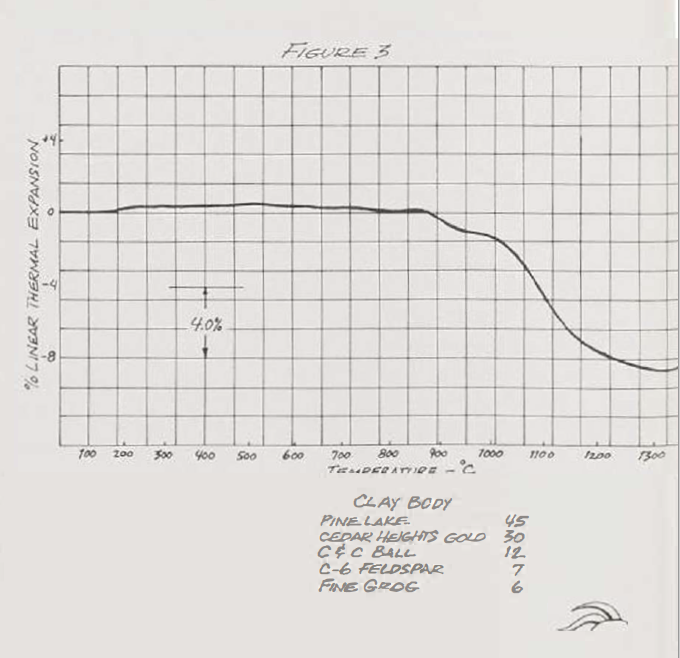 During a firing, the clay body expands and contracts. When, and at what rate, vary in each clay body. The first step in shorten­ing the firing cycle is to obtain an approxi­mate thermal expansion curve for the clay body to be used. Universities with a Ceramic Engineering Department have the facilities to run such a test.

The general principle of fast-firing is to go slowly through the temperature ranges where the clay body is moving (to avoid warping and cracking) and then raise the temperature as fast as possible for the rest of the firing.

Glaze firing can go up to 1000°C very rapidly. We get to C/6 (where we start body reduction) in 4-4 1/2 hours, seemingly without affecting the refractories or the pots. Fast firing is best left for the oxidation part of the firing cycle. since too many other factors enter into reduction

A potter’s goal, then, in trying to maximize fuel efficiency is to use as little excess air or excess fuel as possible during a firing (analyzer readings should be as close to neutral as possible) to reach tem­perature in the shortest possible amount of time, yet still, achieve the desired physical and aesthetic end results.

3. In addition, a sampling tube is necessary. We use a quartz (silica) tube, which is available from your local laboratory supply house at a much cheaper cost than the one offered for sale with the analyzer by Bacharach. The standard length should be between 1/8 inch and 3/16th inch. The cost should be less than $10.00. We get ours from the MacAlister Bicknell Co. Box 5. Eastwood Branch Syracuse, NY. 13206. Catalog number 19012.

4. George Wettlaufer is a former engineer turned production potter who lives with his wife Nancy in Skaneateles, NY. They are the authors of The Craftsmans Survival Manual.