Post-college—forty-five years ago now—I first touched clay at the Clay People studio in Chicago. (The original “Clay People” were some mean alien clay buggers on a TV show called Flash Gordon, back when there were only three TV stations—no kidding!) It was an excellent place to learn to throw. As a student, you could use all the clay you wanted and were charged only for what you used at the firing stage. My teachers were great. Bruce Jacobson and Francis Sho Kaihatsu helped to shape my future and were a big part of that clay studio and Chicago pottery scene of the early Seventies. (Maybe some of you remember? Francis eventually moved over to Lillstreet Art Center.) It was so great! We had a "Gerstley Borate Lounge"—two chairs and a coffee maker—in which to drink coffee and cruise. (I had no idea then what the heck GB was, but …) Lots of other interesting people (part-time hippies?) were there seeking alternative lifestyles. We were all seeking alternative lifestyles.

I was there to soothe my frayed nerves after teaching elementary-school kids all day in downtown Chicago. I taught kids ages six to nine at Parents School, an incredible alternative school in what is now the Old Town neighborhood. It was an offshoot of Chi-town’s Second City comedy club, set up as a local option for kids in that area. The meditative-style concentration of throwing clay at Clay People was therapeutic, similar to playing the drums, which I did in high school and college. (At that time, I would have immediately made a joke here about playing with things between my legs.) 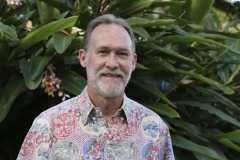 Bob McWilliams, a Midwesterner, made it to Hawaii in 1975 and vowed to become a potter. Forty-three years later he has no regrets. He has been a full-time potter and teacher for over twenty years, and a Fulbright Memorial Fund Fellow. He has traveled, studied, written articles, and always sustained his passion for clay. The 2017-18 school year is his last teaching ceramics at Punahou School in Honolulu—“Amazing!” McWilliams can be reached at rmcwilliams@punahou.edu.