In the spring of 1972, I found myself suddenly becoming the old experienced potter on Cape Cod. Bearded and successfully potting in a beautiful wooded lakeside, I became a prime target for apprentices and beginning potters. Even though I love to talk and share any information I have, I soon found that too much time was taken away from my work. I decided I couldn't handle it alone, so I called together the most frequent visitors to my shop. We met at my home, about ten of us: Ken D'Agastino, Gail Turner, Janet Burner, Tina Holl, Roger Harvey, Rob Huller, Susan Lord, Mike Garrison, and myself. I brought up the possibility of forming a group of self-help potters. We agreed that our needs were many but that the major ones were: a dependable source of inexpensive materials on Cape Cod; a way to mix clay that could be shared by all; and a way to share resources and information. All of us felt that many established potters were too secretive. We decided that glaze formulas, clay recipes and any other information passed on for centuries should belong to all potters. It is, after all, what a potter does with this information that counts. In this way, we hoped to make better potters of ourselves, without fear of competition – for there will never be enough really good potters.

Our first step was to locate an inexpensive storage location. Luckily, we found a large barn locally which was in bad repair but was available for twenty-five dollars a month if we did the needed work on it. We also found a dough mixer in excellent condition for 800 dollars. We borrowed two thousand dollars from a bank on the signatures of three of us who had credit. All of us pooled our orders and promised to buy all our materials and pay cash together as soon as the orders came through. We held work meetings to get the barn in shape, and to get a clay mixing room in shape.

In looking back, I find those days were the most exciting. I especially remember sunny Sundays and a busy work crew dusting up a storm getting the barn cleaned up to move into. It was fantastic, the amount of work we did in one afternoon! These experiences working together formed lasting bonds be­tween people who otherwise would never have met. Friendships developed which made it possible for us to survive rough times.

During the first year we were forced to spend a great deal of time doing the inevitable: discussing money. It took us two years to pay off our bank loan. Our suppliers were patient with us as long as we paid them something. Collecting money was also a problem, especially with schools. Members had to pay cash as soon as they received the goods, as we found billing to invite too much paper work with few results. (We have two types of members: working fee 10 dollars a year, non-working fee 50 dollars a year.) We had to decide on prices with their appropriate mark-ups: base price, co-op member's prices, public prices, and school prices. We began by charging ten percent above costs to members but had to raise it to twenty percent, as we found ten percent insufficient to carry our overhead.

After two years, all the repairs were done and our rent went up. Our inventory was spreading to include tools, glaze materials, electric kiln and almost everything else potters might need. In spite of our twenty percent mark-up, our prices were considerably lower than anywhere else. In addition, there was the added convenience of no shipping charge. Our price per pound was the same whether you bought one pound or a bag. Here are just a few price comparisons:

We try to stock enough to avoid shortages, keeping a close check on inventory so that it is rarely that we are out of anything even during the so-called shortage crises. We have people who are tracking down new sources of materials all the time. All of us contribute to this constant search. At first, we bought from retail dealers who gave us discounts on quantity sales. Then we found area distributers who just handled a few materials wholesale. Now we are buying some supplies direct from importers or mines; they usually sell one or two related materials. However, sometimes, while the price is low, the shipping costs, which are often high, make this sort of purchasing impossible.

Buying from large corporations can be very difficult. Frequently, because of the small size of our orders, we are referred to local distributors, rather than sources which do not want to be bothered dealing with us. Occasionally, a top level person will take an interest in the lowly potter and therefore cut a lot of red tape. I've had this happen to me several times in my twenty-five years of meeting people in my shop. I've discovered many vice-presidents to be frustrated potters.

Meetings must not be attended out of responsibility alone. Our co-operative meetings have become exciting events. Everyone agrees that the work meetings are the best. It has been my job from the beginning to chair the meetings, except for special presentations. Currently we are working on a plan to pass responsibility to different people.

At first, all business was conducted at our regular meetings with all members present. This became impossible when our membership grew to fifty-five, and over thirty people attending meetings. Now a small committee does most of the planning and makes day-to-day decisions. This committee is made up of the heads of the work committees, which are responsible for various maintenance tasks. There are usually ten to twelve attending this meeting.

Here are the titles of the committees, so you can get a feel for what we do. "Barn Clean-up," "Barn Maintenance," "Unloading," "School Deliveries," "Inventory," "Pricing," "Clay Making," "Mailing Program," "Membership," and others as we need them.

The planning committee decided what has to be done and who we are going to get to do it. It meets once every two months. Our regular meetings are once a month and anyone can attend. The work committee heads try to get together their various work crews for at least two hours work every month.

Our big monthly meetings usually have three parts. First, a short business meeting is held, usually to make announcements. Second, the main body of the meeting takes place: a workshop, movies, slides or a discussion. Third, we have refreshments and general socializing. (We try to move our meetings around so that we can get to see the workshops of different potters.) Here is a small list of the programs we have had: "Making Cane Handles for Teapots," "Tool-Making Evening," "Visit to a Sculptor's Studio-Fifty Years of Work," slides of potters apprenticing in England, three potters demonstrating different approaches to clay, "Basic Brush Work," "Glaze Calculations," "Keeping Records and Paying Taxes," "Kiln Building," and many others.

We have also spent many meetings trying to draw up bylaws and trying to become incorporated as a non-profit organization. The main idea was to try to get some grant money so we could have our own center for potters on Cape Cod. We spent over a year on all this only to give it all up as a waste of time. It took too much time and energy away from our work and running the co-op itself. We would have had to set up a phony organization in order to sell supplies to ourselves and invent projects in order to get funding for them. Nothing we needed was in a category that was eligible for funding. What we needed was what we were doing for ourselves. It would be nice to have our own building and land but that would require a very generous and understanding benefactor, which we do not have.

It is difficult to advise other co-ops, as their needs will differ from that of ours. Generally, it takes a core group of hard workers to carry the co-op through the first couple of years. Although everyone will agree that a co-operative is a necessity, not everyone sees their responsibility equally. It would almost appear that people must be educated in order to cooperate and initiate on their own. More than once, emergency meetings were called to either disband the co-op, or to put it into a viable business form. After three years and countless reorganizations, we have worked out a plan whereby the work is distributed through committees, and they along with the general overseer are responsible for getting things done. It is advisable that any co-op constantly assess the needs of its membership and evaluate methods of organization towards more efficient and responsible goals.

I remember once when we were ready to give up, someone said, "If we can't make co-operation work, what hope is there?" Very often when people find they cannot make it alone, they turn to some co­operative effort. There is so much energy and untapped resources in people to be shared, we miss out on this when we go it alone. I've found that no matter how much I give, I've always gotten much more in return. 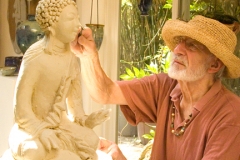 * This short bio was taken from the Cape Cod Museum of Art's website linked below.