Introduced by, and interviews conducted and organized by, Sophie Cornish-Keefe

Brooklyn has long held allure for young, somewhat transient creatives. Whether it is because of the palpable legacy of artists who hatched in its neighborhoods or the certainty of rubbing elbows with countless outside-the-box types in everyday interactions, Brooklyn is a place where people come to be inspired, where it seems impossible not to be inspired. When I chose to relocate to Brooklyn after a short stint in rural New England, I knew the practical sacrifices I would be making in terms of space and money (there would be less of both). I had other misgivings, less quantifiable and therefore harder to reconcile, about the move.

I had often observed the raised-eyebrow reaction to Brooklyn-bred artworks by the greater (and, in my opinion, “old-school”) ceramics community. Well-meaning friends and family shared countless articles on social media that declared Brooklyn and other sites of urban claymaking as “having a moment.” Like many others, I reacted to these articles with an eye-roll.

The authors’ voguish fascination with the medium both repelled and intrigued me. Free from the vernacular of what I might call “academic ceramics,” Brooklyn ceramicists were making work untethered from tradition and receiving hugely positive support from their communities. Notwithstanding its obvious Instagrammability, the work was being declared an “antidote to all the electronics.”1 Despite often breaking all the rules of a formal education in the medium, the artists and their work were creating a broad interest in ceramics, which by extension, could surely benefit anyone working in clay. And so what did these authors, and presumably their readers, see that we formally trained potters with our nose-upturned dismissal did not? Was I blind to the merit of this work because of my own material literacy? In moving to Brooklyn, I wondered if I might find answers to these questions, and more. What I sacrificed in square footage, I posited, I would make up for in being a part of a dialogue that demands a certain daring. For, living in the penumbra of New York, it would be impossible to exist in isolation. I’d share my space, intimately, with eight and a half million others, who would breathe their energy into mine. 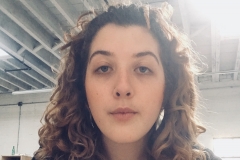 Sophie Cornish-Keefe is an independent artist working out of Permanent Maintenance, a newly opened ceramics studio in Ridgewood, Queens. She studied ceramics at the State University of New York at New Paltz, where she received her degree, a contract major in fine art, English literature, and sociology in 2016. Her work is primarily sculptural with an unexpected utilitarian twist.
She can be reached at sophiemay@mac.com, and followed on Instagram @newbabyartist.