Anonymity and a Secret Afterlife

Artist Richie White seems to have a knack for getting reviews that aren't so much about his work as about what happens to it. The first time this oblique recognition caught my attention was when I read "An Early Departure," by Mike Boehm in the Calendar section of the Los Angeles Times (January r5, 2008). According to the article, elements of a work by Richie installed in an airport exhibition were censored because they appeared to depict corpses. Richie said that they were just people having a bad day. I can understand how one might think "death," given that a few of the charred-looking figures were hanging by the scruff of the neck. Reportedly, airport officials were concerned that these sculptures would upset outgoing passengers. An article about controversy related to your work is not quite the same as a review, but as they say, there's no such thing as bad press.

Five years after I read the article, I visited Richie at Saddleback College, where he teaches. He gave me a tour of the studio and the campus, which houses an elegantly flowing, massive veterans' memorial that he and Fred Olsen designed and built - a truly impressive piece of public art. Also on campus were many of Richie's larger-than-life figurative sculptures: coiled abstractions of bodies in postures of repose or stretching, perhaps dancers waiting for the next thing to happen. These headless sculptures are far larger, livelier, and more abstract than the airport sculptures, but both bodies of work convey a mild sense of impending transition. I was struck by how many and how prominent these campus sculptures were.

"Wow," I said, "free storage." In hindsight, I realize this wasn't the most gracious reaction one could muster. But what artist doesn't have an issue with storage?

"Oh, this is nothing. I've got a bunch of work buried in thedesert. That's free storage," Richie replied. • Work buried in the desert? I associate burying with eternal rest, not something intended for exhibitions. In the name of free storage, he has created the potential for an archeological dig - of contemporary art. To me, this idea borders on the magical.

Our conversation continued. "No, I don't take images of my work. I'm bad at marketing," Richie admitted. "No, I didn't document the burying of any of it. I suppose if someone wanted to buy one of the works I could draw them a map of where to find it."

"But how are they going to know it exists to be bought if you didn't at least take a picture of it?" I asked. "Oh, yeah." 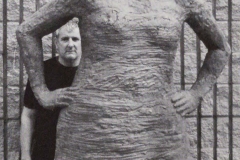 Stanton Hunter is an artist and professor of art at Chaffey College in California.