Akio Takamori: Out of the Cage

My mother phoned recently to notify me of the death of the Koishiwara potter, Oota Kumao, with whom I apprenticed from 1971 to 1973. His death made me reminisce about my last twenty years. Even though the twenty years seems short, the time brought a young, inexperienced man to be a middle-aged person who, at the time of the calI, was thinking of the next twenty years with humility.

Twenty years ago, my first purpose in studying ceramics was rather vague. All I knew about my future was that someday I would set up a pottery production shop near my parents with their help. I believe this idea was also my parents’ wish. For two years I went to an art school in Tokyo as an industrial ceramics major, and for two more years I apprenticed at a domestic production pottery in the village of Koishiwara under Oota-san. My knowledge, however, was narrow and my skill limited.

At least I had a feeling that there was something out there when I saw the catalog of the Contemporary American Ceramics show that was held at the Kyoto Modern Art Museum in the 1970s. I still remember clearly Henry Takamoto's ‘Tree" on the cover. I saw Melcherf's "Grotesque A" and Richard Shaw's piece with a big boat sinking in a couch.

I was interested and attracted to those new American ceramics, not because I liked them so much but because they looked different, fresh, creative and also anti-authoritarian. I was just twenty years old and quite intimidated by the factional, authoritarian world of ceramics in Japan. Japan's pottery establishment had a long history and a system that is rigid and exclusive.

But America seemed so far away.

Still, America and its ceramics was always on my mind during my apprenticeship in Koishiwara. America started to get closer by meeting other American apprentices in the village. Finally, Ken Ferguson visited there one day from the Kansas City Art Institute. Somehow Ferguson understood my English, as I did his. It was quite simple. I told him of my interest toward American ceramics and schools. Then he told me that the Kansas City Art Institute is the best undergraduate ceramic program in the United States, and that I should come.

After this conversation, the reality of going to the United States to study ceramics grew on me strongly. I stayed in the village another year until the decision burst out of me. I had no hesitation then. At the pottery production, my life was predictable, everything was in order. I knew exactly what they expected me to do. I was a good worker and they liked me. But the pottery skills I learned were useful for making what the domestic pottery factory produced. I was not capable once I left the  village. I realized that I had to learn for myself.

I must say, however, that I owe a lot of my personal growth to being under the tremendous discipline of production. Oota-san was a great potter who truly loved making pots. He made beautiful pots during the seventy years of his career. I have never seen anybody as content as he was behind a throwing wheel.

During my first semester at the Kansas City Art Institute, I was exhausted and lonely for a while, mostly because of my poor English skills. I began throwing on the wheel. I was still under the spell of Koishiwaraware. Everything I threw became Koishiwara ware in appearance. Basically, my mentor at the production factory, Oota-san, was a faithful follower of the Mingei movement. Naturally my interest and knowledge were focused on Mingei aesthetics. I suppose that, generally speaking, we have stronger factionalism in Japanese pottery than in the United States. In Japan, I was never encouraged to look at other ceramics than those taught by my teachers. I was almost discouraged to look around at others. Therefore, I had to focus before I could find what I liked. I remember the feeling of being a young, inexperienced man who is about to go out into the world. I suppose I had a choice of being thrown into the ocean to find my own way to the island where I'd like to land or of being located on a Iittle island by someone else.

At the Kansas City Art Institute, I was surprised by all the hard working ceramics students. They had tremendous energy and curiosity. They knew more about Japanese potters than I did. They knew about Mingei, Shino, Oribe, Bizen, Tamba, and Shigaraki. I was excited by the choices and access to all the information about whatever interested me. The experience was just wonderful. All those young people around me in the studio enthusiastically produced all kinds of interesting works. It was truly an incredible time, and I was very lucky to be there.

After throwing for two years at the production pottery, I had a hard time finding myself through throwing on a wheel, so I decided to change to hand building. I was very insecure because I had never done hand building since I was a child. At the very corner of the studio, hoping nobody would see what I made, I took a small mound of clay in my palms.

This moment brought me back to my childhood when my father loved everything I made and was the collector of my work. But I had gone through the age in which children don’t trust their parents’ judgement or are not satisfied with it any longer.

At that point, I needed guidance from somebody else like a teacher or a classmate. Meanwhile I lost contact with what I used to be as a child. I had been molded by all those years of restriction, judgements and a value system which formed me as a young man.

Ken Ferguson looked over my shoulder at my tiny pieces and told me, 'They are very nice. Make lots of them." It was like magic. The cage built around me disappeared. I can't explain how much that remark meant to me at that moment. I felt as if I had finally rediscovered something that was truly mine, and it was okay to make it.

I was a very happy young Japanese man in the United States in the Spring of 1975.

Web Editor's note: Studio Potter thanks Dennis Trombatore for his support in memory of Akio Takamori.  Learn more about supporting our efforts to develop and improve access to archive articles here. 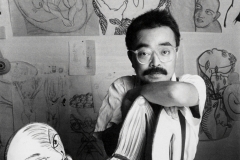