Ahikaaroa - Long Ago Fire: An Interview with Lillian Pitt and Richard Rowland

In the mid-1990s, when I was starting out as a potter, I had one of those amazing life-changing chance encounters, a sort of lucky break: I was invited to join the community firing at Richard Rowland's Astoria Dragon Kiln, an anagama-style kiln close to where the Columbia River empties into the Pacific Ocean. It was there that I first met Lillian Pitt, one of the artists firing her work in Richard's kiln. One day, as Richard and I were hanging around the kiln, most likely discussing the ash qualities of different wood species, or maybe what makes the perfect mug handle, Lillian came walking up the hill to the kiln with a couple of Māori guests from New Zealand.

I left Oregon soon after. However, I kept in touch with Richard and often heard from him about how that meeting was another one of those serendipitous moments, as he became more involved with shows and workshops with an informal network of indigenous artists from around and within the Pacific Rim. When Richard rebuilt his anagama kiln, he invited some of the Māori "muddies" to come over for the first firing, during which they named the newly constructed kiln "ahikaaroa," which means "long ago fire."

I recently sat down with Lillian Pitt and Richard Rowland to ask them about how those relationships across the Pacific had come about and how they had influenced their work as indigenous artists working in the Pacific Northwest. Our edited conversation follows. I began by asking each artist how they'd like to be introduced:

Lillian Pitt: My name is Lillian Pitt, and my Indian name is Waximu. That means camas, a sacred plant in the Columbia River Gorge, which is my ancestors' home. I'm a Warm Springs, Wasco, Wishxam, and Wyam native and have been a potter for 40 years or around there.

Richard Rowland: My name is Richard Rowland. I am a ceramic artist living in Astoria, Oregon. I have lived here most of my life. I like to be referred to as Kanaka Maoli in the native Hawaiian manner; this means a Hawaiian, having Polynesian blood, born in Hawaii. My mother lived in Hawaii before she met my father in the 1940s. She was born in Kalaupapa, Molokai, Hawaii; her mother resided in Kalaupapa, which was a leper colony. My great-grandmother, Liliana Kekai, was from Hawaii, the Big Island, and so these are my roots. 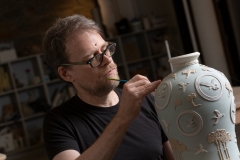 Brad Menninga received his BA in politics from Oberlin College (Oberlin, Ohio) in 1992 and his MFA from California College of the Arts (San Francisco) in 2010. He has published with Ceramic Arts Daily and Pottery Making Illustrated, and facilitated activist art-making workshops through the Portland, Oregon, chapters of Jobs with Justice and Art and Revolution. Menninga has created solo installations at the Mall of America in Minnesota and at the 2019 National Council on Education in the Ceramic Arts Conference (St. Paul, Minnesota). He is the recipient of a 2020 Minnesota Artist Initiative Grant and 2020 McKnight Artist Fellowship for Ceramic Artists.