Like most worthwhile journeys, Jessica Steinhäuser’s career as an award-winning ceramic artist began with a leap of faith.

At the age of twenty-two and looking for adventure, she emigrated from Germany to Canada, where she established Stonehouse Pottery in downtown Guelph, Ontario, an eclectic university town about an hour west of Toronto.

Nearly twenty-five years later, she took another leap, this time, choosing to stop producing the exquisite ceramic vessels and intricate mosaics that had built her reputation. Instead, she would devote her energies to breathing new life into an ancient craft that marries the beauty of ceramics with the function of sustainable home heating.

It was a huge gamble, and now she’s busier than ever.

Steinhäuser designs and builds kachelöfen (kah-kel-low-fen), ultra-efficient wood stoves made from hollow clay bricks. She currently has two projects in progress for homes in Canada, plus another in the design phase for a client in California, and in December 2016, she met with an architect to begin work on a kachelöfen for 207-year-old barn in Duxbury, Massachusetts, near Boston. In the past decade, she’s built twenty kachelöfen for clients across North America and as far away as Spain and Scotland.

“I never dreamed I would be flying all over,” says Steinhäuser. “It’s kind of crazy, you build about the biggest piece of ceramic you can imagine, and suddenly you’re flying them all over the world.”

Used to heat homes and castles in Europe for more than 500 years, kachelöfen were virtually unknown in North America until quite recently. Also called masonry heaters, kachelöfen are designed with a small firebox and a refractory brick interior that burns wood at very high temperatures and, unlike conventional fireplaces and woodstoves, with virtually no harmful emissions. The design forces the heat to rise through a winding, snakelike flue. The bricks absorb the heat and radiate it outward slowly, providing constant, comfortable warmth while the surface is never too hot to touch. Kachelöfen are so efficient that a few logs can provide heat that lasts an entire day.

“When I was a child in Germany, a kachelofen was literally the hearth and heart of our family home,” she says. “I have many fond memories of the warm comfort it gave.” 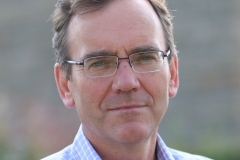 Barry Gunn is a writer, editor, and father of three based in Guelph, Ontario, Canada, who has been known to throw a pot or two in the kitchen, but never on the wheel. He is co-founder of Curry Gunn & Associates, a communications firm that helps entrepreneurs share their stories and inspire their communities.