This is the work of Estonian artist Ingrid Allik, who created this fire-sculpture specifically for STARworks using a “petal kiln” designed by her husband, Andres M.I. Allik. Ceramics Monthly published an article in its January 2017 issue about the development of this kiln. In an impromptu interview on Sunday morning, Ingrid, accompanied by fellow Estonian ceramicist Anne Pärtna of Blue Hen Pottery (Seagrove, NC), told me a little more about this particular work, and her other work.

This was Ingrid’s first fire-sculpture, though her husband has been involved in this style of work for some time. In designing this work, she considered the size of the petal kiln, which had been used in several previous firings, the performative effect of the unveiling of the work during the height of the firing, and that the work be representative of STARworks.

Ingrid used local North Carolina clay, one of STARwork’s original formulas that includes about 40% grog for strength and probably a host of other qualities like low-shrinkage, warping, thermal shock and dunting, though we did not discuss the latter four specifically.  She intended the form to have a striking upward movement from oval at the base to seven-pointed star at the top. The feeling of lightness she aimed for in this work is a theme throughout her main artistic work, which employs whatever material and techniques best suit her vision.

The work was slab-constructed over several days with the help of assistants. Piercings in the sides of the form are dual-purpose: They transmit heat at the bottom and middle of the piece during the firing for a more even temperature from top to bottom, but most importantly, when the piece is unveiled it creates stunning gems of fire that curve up and around the work. 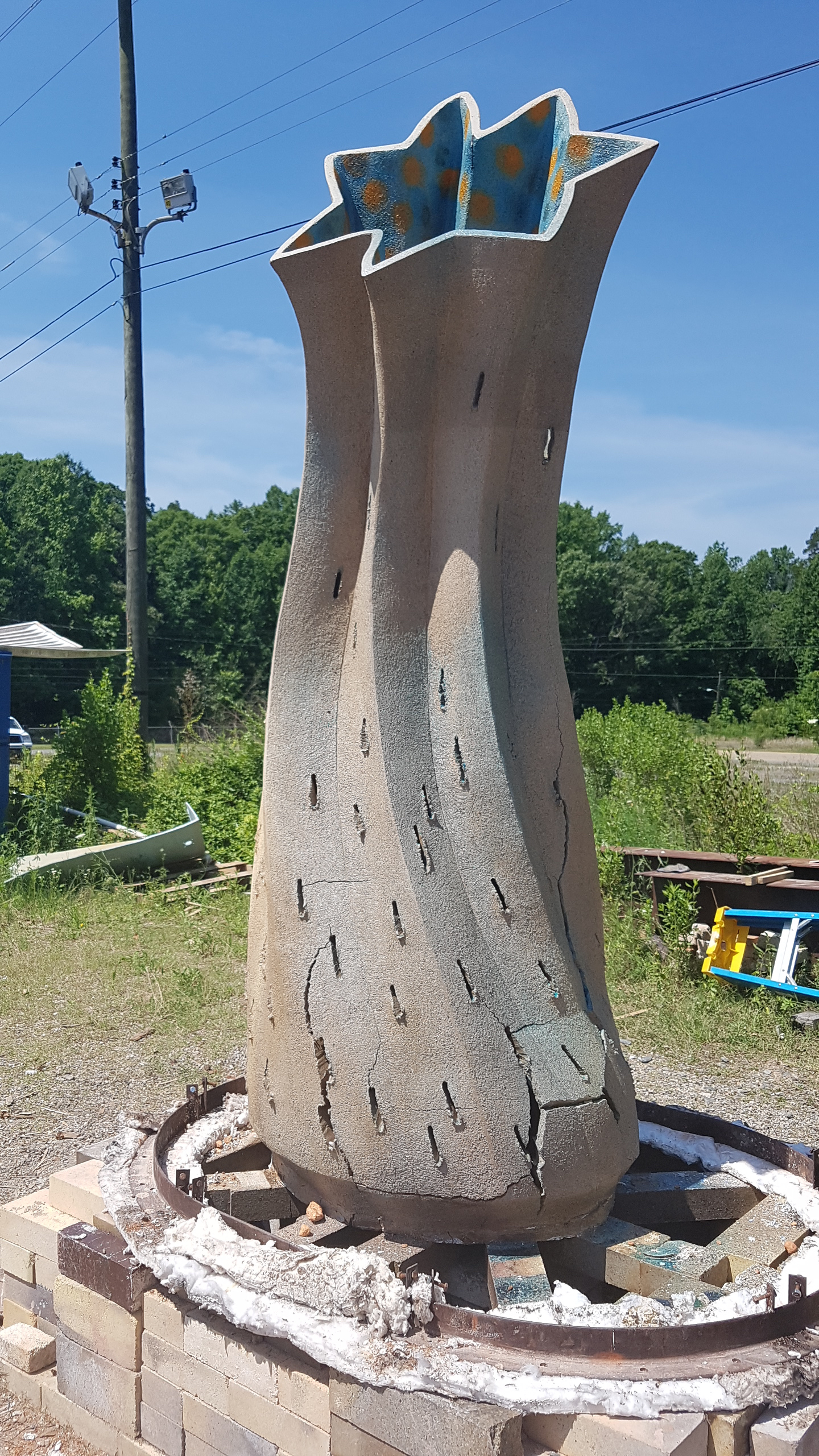 The surface of the work was enhanced by the crew’s tossing a mixture of sawdust, low-fire clay, and frit onto the work.  Similar to traditional salt- or wood-firing, this melts instantly to the molten clay and creates color and texture effects. Anne tells me that in her experience with fire sculptures, when the petal kiln is closed up again for cooling, the surface doesn’t retain these effects as well as when the piece is left to cool un-covered because the insulation of the kiln keeps the temperature a little too high, and more of the wood-ash or other materials burn off.  Additionally, if the kiln is not closed up again before the temperature drops too much, they have cracking due to quartz inversion.

The finished work has some cracking at the base, which Anne says is due to the damp conditions prior to the firing, and the possibility that the clay was not thoroughly dry when they began firing.  At the beginning of the firing, gas was used as fuel, then the crew moved to wood, stoking in four ports in the firebox built underneath the sculpture and kiln. They stoked on alternating sides, cross-wise from each other throughout the firing up to Cone 10 (2300ºF).  The crew is a carefully coordinated group, where each member has a specific role. As one can imagine, planning and safety are extremely important.

Ingrid is pleased with the result of this work, which will be moved to a permanent site on the STARworks property. Ingrid is energized by this kind of project-based work and says it keeps her learning something new.  You can follow her on Instagram @ingridallik, or get in touch with her directly via in@kerako.ee.

Before COVID-19 shuttered us all away, before “social distancing” became embedded in our daily conversations, I was crafting plans to travel to exhibitions around the country and to visit artists in their studios on short tours of various regions. My vision was inspired by our founder, Gerry... Read More

Studio Potter is pleased to announce the 2020 winners of the Studio Potter Merit Award from the NCECA Juried Student Exhibition. This year the show was very strong, and we applaud the awardees for their excellent work. The awardees are invited to write for Studio Potter, so keep an eye... Read More

Seven months ago I was driving to Minneapolis to work at Northern Clay Center one last time. On the drive from Kansas City a friend tipped me off that a call had gone out from Studio Potter.

They were looking for a new editor.

I had a plan in place for my post-arts-administration... Read More