Although her given name was Thelma, I never heard anyone call her that. I first met Bunzy Sherman in 1989, soon after I became director of the Haystack Mountain School of Crafts on Deer Isle, Maine.  She and her husband, Irving, were one of a few legendary couples who took workshops at the school every summer. They’d begun coming to Haystack in 1972. Bunzy always took pottery workshops, while Irving took workshops a few different studios. They were also enthusiastic participants in the other creative and improvised activities during a session. Irving once dressed up as Cardinal Richelieu for a Bastille Day costume party. Bunzy was at all the impromptu dance parties and, unlike many of our inspired dancers, really knew dance steps. Irving and Bunzy would bid up items at our benefit scholarship auctions and take many objects home with them.

Both were linguistically and culturally rooted in New York City, so it came as surprise to us at the school when in 1989 they announced that they would be buying a house on Deer Isle (which is about the same length as Manhattan, but with only 3,000 year-round residents) and living there year-round. At 67, Bunzy learned to drive, and she and Irving involved themselves in the life of the island, supporting Haystack and other nonprofits and volunteering in the schools and community. Bunzy set up a pottery studio, Irving set up a papermaking studio, and they continued to take workshops at Haystack. Irving died in 1994; Bunzy, born and bred in the city, was on her own in the country. Her involvement in the life of the small town of Deer Isle only deepened: judging the floats in the annual Fourth of July parade, acting in the “Cabin Fever Reliever” community musicals each winter, reading to students in the elementary school. She endowed a fund in Irving’s memory to provide an annual scholarship for an island student or artist to attend Haystack. She had many dear friends on the island and around the country.

And she continued to make pots. Bunzy took 39 workshops at Haystack—her last one was in 2014, when she was 90. She pursued pottery as an avocation. Schools such as Haystack bring together people of varied ages and experiences. Bunzy was an integral part of that mix. She was equally comfortable with graduate students and beginners. By the end of any session, everyone knew who she was. She became an inspiration to many as a lifelong learner—and as a stylish dancer into her eighties. She was forthright and had opinions, which she shared freely. She cared deeply about working in clay and about being part of a community of potters, not just on the island but around the world as well.

The late Paulus Berensohn used to talk about the etymology of the word amateur, which when compared to the word professional, can have a negative connotation. The root, he would say, is the Latin amare, which means to love, as in loving the work that we do. Bunzy loved to work in clay. In 2005, she opened a small shop in her barn and hung a sign, “Bunzy the Potter,” by the road. No need for a last name. Everyone knew who she was. 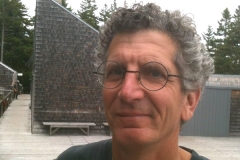 Stuart Kestenbaum is a poet and former director of the Haystack Mountain School of Crafts.  He's currently serving as Maine's poet laureate and is the host of the podcast Make/Time. Follow him on social media @stukestenbaum.